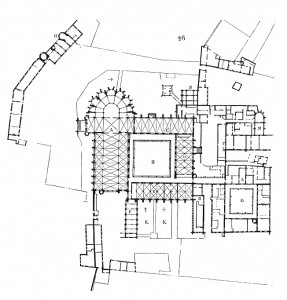 In 1304, the French King Philippe IV le Bel (r. 1285-1314) founded the convent of Saint-Louis de Poissy, in honor of his sainted grandfather, Louis IX (r. 1226-1270). The convent sits near the banks of the Seine, a few miles northwest of Paris. It was originally intended as a royal house, open only to noble women. Eventually it came also to accept commoners who had royal dispensation. It remained active until 1792, when it was destroyed during the French Revolution.[1] The convent church was demolished in the early nineteenth century, and few elements of the house’s architecture survive in the modern town of Poissy.

In some ways, life at Poissy was secluded and austere. The convent was an enclosed house, which meant the nuns were supposed to have very little direct contact with the outside world. They lived entirely in a walled abbey and even sat behind a screen in the church so that they could hear the prayers and sing for the laity without compromising their solitude.[2] The abbey consisted of a church, dormitories, a refectory, an infirmary, chapels, apartments, a cemetery, and small public spaces, with was a royal residence on its outskirts. These areas sufficed for the daily life of its nuns, who were supposed to follow a rigorous schedule of prayer and to maintain long daily silences, most strictly observed in the chapel, the dormitory, and the refectory, where, although conversation was forbidden, they regularly listened to religious readings.

Although the nuns were physically confined to their abbey, they had significant control over their financial affairs, which they conducted through intermediaries. The house’s finances were complicated and often substantial because, in addition to royal funding, many of the nuns were supported by gifts from their noble families. The financial and logistical operations of the house were overseen by a prioress, who until the seventeenth century was elected by the other sisters.[3]

Despite the nuns’ enclosure, the abbey was never fully secluded from the outside world. It was intentionally built near Paris, and its church was even oriented so that its north transept would be immediately accessible to the local townspeople.[4] Literary evidence indicates the convent hosted guests during the fifteenth and sixteenth centuries. For instance, the late medieval poet Christine de Pizan’s (1364-1430) narrative poem, “Le livre du dit de Poissy” famously describes the poet’s trip to visit her daughter, who was living at the convent.[5] Although she notes that the nuns were secluded from the outside world in the church and dormitory, she writes that the convent’s inhabitants were allowed to receive visits from male relatives and other guests.[6] The sixteenth-century poet Nicolas Rapin (1535-1608) wrote a poem that centers on his courtship of a Poissy sister. Although there may well be some element of fantasy in his account, it is telling that his poem never questions the suitor’s access to his beloved.[7]

Dated between 1450-1500, the Bryn Mawr processional was probably made in the period directly following the Hundred Years’ War (1328-1453), which was fought between the House of Plantagenet, which ruled in England, and the House of Valois, which ruled in France.[8] The war drove the Poissy nuns from their convent in the first part of the fifteenth century, forcing many of them to shelter in Paris, while their house was occupied and its countryside pillaged and beset by famine.[9]

After the war, the convent was restored with the support of the French monarchy. It soon entered a period of comfort and affluence, during which its nuns attained new levels of freedom. Several of the most high-born sisters were given dispensations for special luxuries such as living in separate apartments or speaking at previously forbidden times.[10] Records also show that in the late fifteenth century members of the community were granted an unprecedented number of religious concessions, which diminished their religious responsibilities and lightened restrictions on their habits of dress, eating, and personal interaction.[11] During this period, the convent housed the greatest number of professed nuns in its history.

In 1506 – eleven years before Martin Luther posted the ninety-five theses that began the Protestant Reformation – Jean Cleree, who was a high official in the Dominican Order in Holland and confessor to France’s King Louis XII, began a campaign to reform the Poissy convent. His efforts, which involved deposing the prioress, bringing in sisters from a different convent, and threatening excommunications, sparked a conflict between the clergy and the nobility that lasted for decades. Louis XII became involved as did Pope Leo X. Despite an official reform by the Dominican Master General, the house’s privileges and concessions were restored in 1553.[12] Poissy was more formally involved in the Protestant Reformation when, in 1561, it hosted a religious conference, now called the Colloquy at Poissy, that aimed to reconcile the French Catholics with their Protestant counterparts, the Huguenots.

[2] The priests sat in the sanctuary of the church, and the nuns in the nave. See, Paul Lee, Nunneries, Learning, and Spirituality in Late Medieval English Society: The Dominican Priory of Dartford (Suffolk, UK: York Medieval, 2001), 98.

[9] Naughton, Manuscripts from the Dominican Monastery of Saint-Louis de Poissy, 103-4.

[10] Naughton, Manuscripts from the Dominican Monastery of Saint-Louis de Poissy, 135

[11] Naughton, Manuscripts from the Dominican Monastery of Saint-Louis de Poissy, 135-6

[12] Naughton, Manuscripts from the Dominican Monastery of Saint-Louis de Poissy, 136-9.